Caturday Blogging: The Man and the Monster (1958)

This Mexican horror film, from prolific producer-actor Abel Salazar, features a leaping kitty co-star, whose role is somewhat confusing: on the one hand, the black cat seems to be a Satanic familiar, signaling Samuel Magno (Enrique Rambal)’s deal with the Devil; on the other hand, the frisky feline seems aligned with Samuel’s disapproving mother (Ofelia Guilmain), acting as a sort of “canary in a coal mine” to warn of her son’s Faustian bargain. But the unnamed feline’s true contribution to horror movie history is that it comes close to being the world’s first spring-loaded cat. 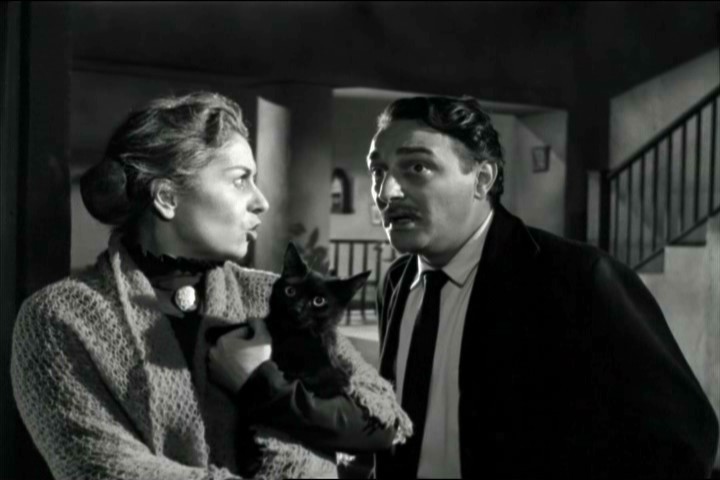 Inconsistent Kitty usually jumps away from Samuel.
For some reason, it remains serene in this scene.

A reporter (Salazar) comes to a small town searching for a pianist who abandoned the concert stage. Our first sign of trouble comes when Mom is in the piano room, and the cat suddenly leaps from her arms when Samuel appears. The cat repeats this action throughout the film, to unintentionally hilarious effect. It’s a bit too obvious that the animal actor has been rigged to prod it into action (at one point you can see a vertical glint of light off a wire as the cat leaps). Confusingly, on several occasions the inconsistent kitty remains indifferent to Samuel’s presence. Furthermore, a flashback reveals that the cat mysteriously appeared the day that Samuel offered his soul to the devil in exchange for becoming the greatest pianist in the world. The implication is that the cat is aligned with the forces of darkness, but then why is it so afraid of Samuel?

Whatever the explanation, the kitty’s historic moment comes when the reporter leads the police to a room where he found a body earlier. Opening the door, he reveals only the cat, which pauses a moment, then leaps out and runs away. The delayed action cannot quite be considered “spring-loaded,” but this is clearly a prototype of many scenes to come.

Read a complete review of the film at Cinefantastique Online.