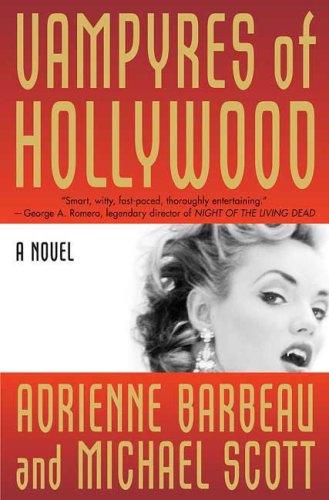 Actress Adrienne Barbeau is known to fans of cinefantastique for her roles in such films as THE FOG, ESCAPE FROM NEW YORK, CREEPSHOW, and TWO EVIL EYES. She is also, now, an author, with a novel coming out on July 8. Written in collaboration with Michael Scott, the book is title Vampyres of Hollywood. In support of the publication, Barbeau will be doing a book tour, with stops around the country but mostly in Southern California. The premise is that vampires - excuse me, vampyres - work in the Hollywood film industry, churning out disinformation that misleads humans as to the true strengths and weaknesses of the undead (for example, the novel's vampires are immune to sunlight). The official description from Publishers Weekly goes on:

Barbeau's ex-husband, writer-director John Carpenter, apparently enjoyed the book enough to provide a funny, favorable quote: "Sexy, funny and gory - and that's just the first chapter. If I'd known she could write like this, I would've stuck around a little longer."