Friday Cat Blogging is an established tradition on the Internet, because it tends to be a slow news day, leaving a vaccuum for bloggers to fill. Hollywood Gothique has made some intermietent efforts to uphold this tradition, but Friday tends to be busy for us, because it is the day that new movies open theatrically. Therefore, we have stolen the term "Caturday" from CuteOverload.com, in order to justify Cat Blogging on that day. We initiate Caturday with EVIL CAT, a 1987 Hong Kong horror film.

This is a martial arts style fantasy-horror film about what happens when a 4000-year-old cat demon is unleashed in the 20th century. There is some bloody violence, but it's not really scary; mostly the story is just an excuse for lots of action scenes, mostly fight scenes. It's fun if you're not too demanding, but it's not really a satisfying film overall.

This is a disapointing movie for lovers of on-screen scaredy cats. The titular demon is barely scene. Twice, it is briefly glimpsed as a feline form of energy (seen above), which is achieved with animation. And twice, its human hosts briefly take on the apperance of a cat (with some unconvincing make-up). For the rest of the film, you see only the Evil Cat's human host; the actor's try to suggest the unseen demon by adopting cat-like mannerisms, but the effect is more funny than scarey.

The only real cat is glimpsed in a single brief shot, and it is not altogether clear what the purpose is. Are we to assume that the Evil Cat has briefly taken on the form of a house cat in order to spy on its next victim? If so, this is the only time the demon uses this subterfuge. 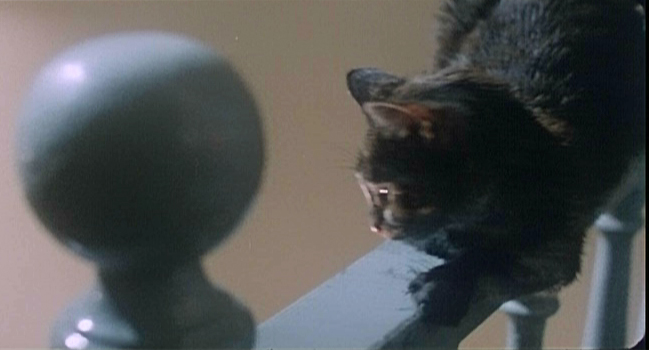 The Evil Cat, or a mere innocent by-stander? The filmmakers aren't saying.

Ultimately, the point of making the villain a cat-demon is never made clear, as there is very little in the demon's behavior that suggests a cat. Presumably, the film is exploiting the mysterious aura surrounding the feline species, which has often led people to associate them with black magic and evil. Unfortunately, there is no resonance to the film's use of the idea. The Evil Cat emerges as a generic villain, just another variation on THE HIDDEN - a being that can jump from body to body to continue perpetrating mayhem.

READ A MORE IN-DEPTH REVIEW OF THE FILM AT CINEFANTASTQIUE ONLINE.