Guess what? HARRY POTTER AND THE ORDER OF THE PHOENIX made its box office debut at #1. Big surprise, huh? In fact, it did so well that (with the help of a few strong holdovers) it prevented newcomer CAPTIVITY - which also opened this weekend - from even registering in the Top Ten. 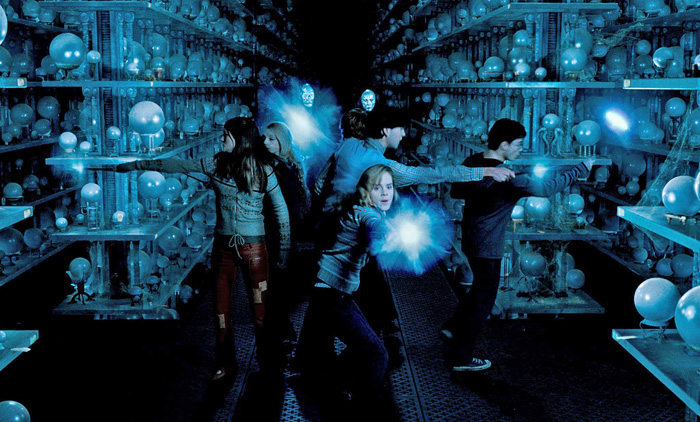 HARRY POTTER conjured up an estimated $77.4-million in 4,285 theatres during the Friday to Sunday period. Having opened two days early, on Wednesday, the film has already earned over $140-million at U.S. box offices.

TRANSFORMERS morphed out of first place into second but remained strong with $36-million. The film's two week total is now $222.95-million.

RATATOUILLE scampered down from second to third place, where it ate up $18-million, raising its three-week total to $143-million.

The only other fantasy film, mystery movie, or horror thriller to make it into the Top Ten was 1408, which held steady at #6, adding $5-million to its four-week total of $62.2-million.

FANTASTIC FOUR: RISE OF THE SILVER SURFER dropped out of the illustrious Top Ten, wiping out from eight to eleventh place. The film added $1.6-million to its five-week total of $127.1-million.

That left CAPTIVITY at #12. The film's debut netted a dismall $1.55-million in 1,050 theatres. Even taking into account its relatively small release, that averaged out to onnly $1,476 per engagement - a sign that the film isn't even drawing a niche audience.

Over at E Online, Joal Ryan points out that the film's distributor, Lionsgate, tried - and failed - to generate interest with a controversial billboard campaign and a Hollywood premier:

Coming hard on the heal's of the box office disappointment of HOSTEL PART II, CAPTIVITY's ticket sales seem to be futher evidence that the so-called "torture-porn" sub-genre is dying an unlamented death. It remains to be seen whether SAW IV (sequel to the film that started it all, back in 2004) can reverse the trend.