For this week's edition of Friday Cat Blogging, we're taking a look at Jones, the mascot of the ill-fated spaceship Nostromo in 1979's ALIEN. 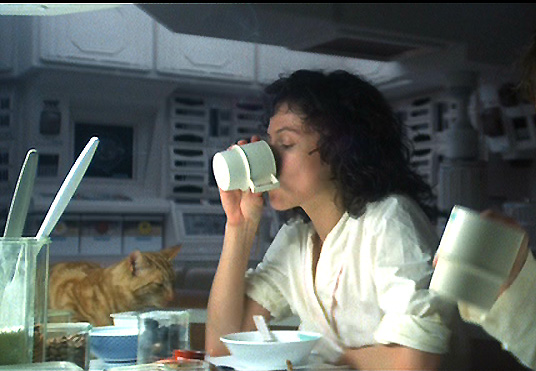 Jones doesn't get much screen time, but he does have some memorable moments and he plays a fairly significant role. Of course we all remember the scene wherein the crew are searching for the Alien and instead Jones jumps out at them, supplying one of horror cinema's great false scares. This leads directly to the death of Brett (Harry Dean Stanton): when he goes to fetch the cat, he encounters the now-adult alien (which has quickly grown from its chest-burster size) with fatal results.

Later, when Ripley (Sigourney Weaver) is abandoning ship (which she has set to self-destruct) she takes time out to rescue little Jonesy, informing us that she's not just the ball-busting bitch her fellow (now dead) crew members took her to be - she actuall cares about animals (well, at least domesticated animals from Earth).

In his influential essay "An American Nightmare," film critic Robin Wood finds some kind of significance in the fact that Jones' name is the same as (well, a shorter version of) the name of the cat in the 1942 version of CAT PEOPLE (who was called John Paul Jones). Wood was writing from a Marxist-Freudian perspective, suggesting that movie monsters represent the "return of the repressed," whether in psychological or political terms.

He argued that the feminist angle of ALIEN (making the woman the hero) was a facade hiding a conservative agenda that ultimately endorsed conventional sexual stereotypes. In this context, Ripley's feelings for Jones show that she conforms to our traditional image of women as being sensitive, emotional beings.

One can debate Wood's argument, but there does seem to be no doubt that Ripley transforms from tough survivor to a more feminine mode in the film's finale, ending in a hiberation chamber that suggests a high-tech version of "Sleepy Beauty." Cinematically, there can be no doubt that the film uses Jones as a device to help signal this transition.