Movies on the Mind - review

I made a trip to check out Movies of the Mind at the Motion Pictures Academy this weekend. This is a traveling presentation that was orgnaized last year to celebrate the 150th anniversary of Sigmund Freud's birthday. Using posters, photographs, staged environments, and film clips, it traces the connection between psychology and cinema, as portrayed in such films as Jean Cocteau's ORPHEE, Ingmar Bergman's PERSONA, and Alfred Hitchcock's PSYCHO and SPELLBOUND. 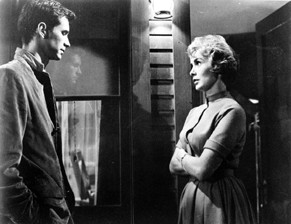 Although the exhibition is not specifically horror-oriented (much emphasis is on foreign and art house films), there is a healthy doze of horror and fantasy included, with clips from DR JEKYLL AND MR HYDE (1931), MANHUNTER (1986), and SILENCE OF THE LAMBS (1991).

Admission is free, but you do have to check in at the front desk, where you show a picture I.D. in exchange for a guest badge that grants you access to the Fourth Floor Gallery that contains the exhibition. On the way, you will see the downstairs lobby for the Samuel Goldwyn Theatre, which currently is filled with gorgeous posters featuring the movie sof Barbara Stanwyck.

Exiting the elevator, you first encounter some letters, photographs, and home movies direcly related to Freud and his work, including newspaper headlines about Goldwyn's failed attempt to enlist the founder of psychoanalysis into consulting on a feature film. (Freud felt that film was incapable of depicting his concepts faithfully on screen.)

The first touch of horror creeps in here, with some samples of photos made in an early attempt to use the camera to aid in the treatment of neurosis. These sequence photographs depict a patient in various stages of a hysterical seizure, and one cannot look at them without being reminded of Linda Blair's contortion's in THE EXORICST. (One suspects that writer William Peter Blatty and/or director William Friedkin encountered these or similar photographs in their research.)

As you move farther into the gallery, you see a series of settings, monitors, posters, and photographs. Each contains some description, usually emphasizing a quote by Freud, explaining how the exhibit relates to psychoanalysis. In some cases the film's were inspired by Freud's work (literally so, in the case of John Huston's film entitled FREUD); in other cases, the films are simply examples that offer themselves up to interesting Freudian interpretations.

One exhibit depicts the "Analytic Setting" (the couch for the patient, the chair for the analyst) while clips from Hollywood depictions of therapy screen on a monitor nearby. Another features attempts to recreate psychedelic, drug-induced experiences on film. A third includes clips from films like Hitchcock's MARNIE that utilize flashbacks to depict repressed memories that cause mental illness. There is a "Crying Room," a small screening room showing clips from famous tear-jerker scenes guaranteed to activate audience emotions vicariously. And a curtained-off area (not recommended for children) features excerpts from voyeuristic films, many with a gender-bender sensibility.

For fans of horror movies and surreal cinema, there are other exhibits of greater interest.

One section relates to profilers of serial killers. There is a quote from Freud in which he likens the work of the analyst to that of a detective, working from small clues to build a bigger picture of the mystery behind the patient's illness.

Monitors offer up clips from MANHUNTER, PSYCHO, and SILENCE OF THE LAMBS. It is certainly fun to see Brian Cox's performance as the screen's original Lecter in the MANHUNTER almost side by side with Anthony Hopkins Oscar-winning turn in the role for LAMBS. Both films feature profilers digging into the insane doctor's mind for clues to a serial killer. In PSYCHO, there is no literal profilers, but a series of characters confront the schizoid Norman Bates, each extracting bits of information tha the audience can synthesize, in a sense turning the viewer into the profile. 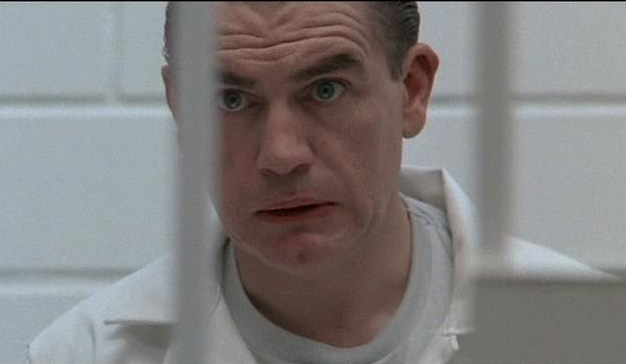 There is an amusing section devoted to the Interpretation of Dreams: a hospital bed rests on the floor, while a projector screens surreal scenes from films by Pedro Almodovar, Luis Bunuel (AN ANDALUSIAN DOG, BELLE DE JOUR), and others. While others awkwardly craned their next to view the dreamy images, I was the only one who actually had the nerve to recline on the bed, and the effect was perhaps not startling but certainly impressive, like slipping away into someone else's dreamland.

Perhaps the highlight for horror fans was an exhibit devoted to dopplegangers and mirror images. In Freudian psychology, unpleasant aspects of one's psyche are often disowned and projected outward; in dramatic terms, this is often depicted by the use of a double or an "evil twin." The concept is illustrated with clips from THE STUDENT OF PRAGUE, DR. JEKYLL AND MR HYDE, LOST HIGHWAY, and BEING JOHN MALKOVICH, among others.

The clip from JEKYLL AND HYDE is particularly appropriate, featuring the first time that Frederich March (as the good doctor) transforms into his alter ego. The scene is filmed with a subjective camera, placing the audience in Jekyll's shoes, and we catch our first glimpse of Hyde when the camera approaches the mirror, revealing Hyde's (our?) reflection.

Appropriately enough, the screen showing these clips is poisitioned is positioned in front of a mirror, so that you can view the image directly or view its reflection - along with your own, just like Jekyll in the movie. 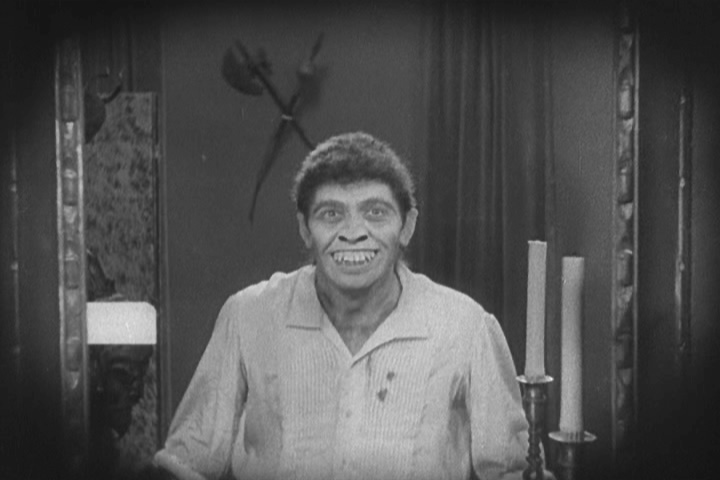 Mr. Hyde (Frederich March) gets his first glimpse of himself in a mirror.

Movies on the Mind is currently making its only U.S. stop at the Academy of Motion Picture Arts and Sciences. Hours for the Motion Picture Academy's Fourth Floor Gallery are from 10am to 5pm Tuesday through Friday and noon to 6pm on Saturday and Sunday.

Get more info at the Academy website. The official website for Movies on the Mind is here.