THE HOST, which opens tomorrow, is – first and foremost – a great monster movie. However, it achieves greatness by striving to work as a good movie in all departments. The Korean film introduces its monster early – in broad daylight – yet much of the horror comes from watching the film’s protagonists, a family whose daughter has been snatched by the creature, fight against numerous obstacles, including their own government, to try to effect a rescue. There is a heavy dose of political satire in the film, which plays almost like a 1970s conspiracy movie (e.g., THE PARALLAX VIEW), with military and government forces shown as at best indifferent and at worst corrupt and outright hostile to the concerns of the citizens.

This element of political satire may be confusing to American viewers, who know of the Republic of Korea (popularly called “South Korea”) as a democracy partitioned off from northern half, which has remained under communist control since the end of the Second World War. However, South Korea has its own history of political turmoil and quasi-totalitarianism, hiding behind the façade of democracy – a history that THE HOST obliquely addresses in the character of a former student protestor who laments that he wasted his youth fighting for democracy in his country, only to see the government turn against his family in their time of need.

Earlier this week, I got the chance to talk to Bong Joon-ho, the creator and director of THE HOST (he conceived the story and co-wrote the script with Hah Joon-won and Baek Chul-hun). I took the opportunity to address some of the issues that might not be clear to Western audiences. Hopefully, this little primer will fill viewers in on the context, so that they can sit back and enjoy the thrill ride without scratching their heads. 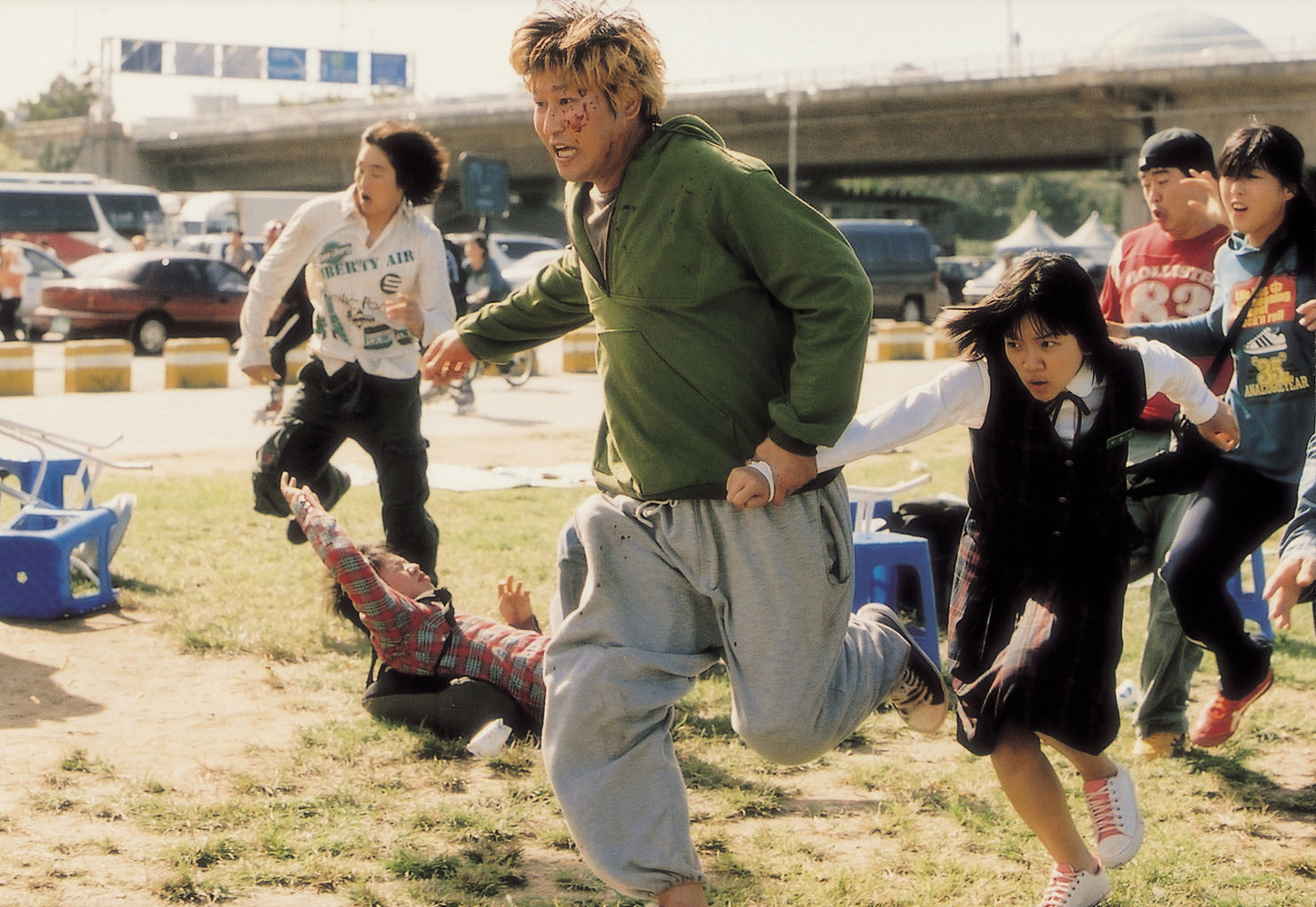 In the film, Park Gang-du (Song Kang-ho) is the eldest of three siblings, working at his father’s food stand near the Han River. When the creature attacks the crowds picnicking on the riverbank one day, the simple-minded man sees his daughter Hyun-seo (Ko A-sung) grabbed and apparently swallowed whole. Later, he receives a brief cell phone call from Hyun-seo, who tells him that the monster deposited her in a sewer, from which she cannot escape. Gang-du tries to enlist the aid of authorities, but they take his unlikely sounding tale as evidence of grief, stupidity, or viral infection; consequently, he and his family break out of quarantine to find Hyun-seo on their own. The film celebrates the resilience of the family unit fighting against great odds while portraying the authority figures alternately as buffoons or unethical psychopaths.

Regarding this negative portrait of the government, Bong Joon-ho explains, “There are lots of elements of satire here. I think it’s because we have a lead protagonist family that are weak and powerless. I sometimes wonder if, for the weak and the powerless, democracy might not be such a huge help. It does take on that perspective. In regards to Korean society or some other countries, I wonder how much the system really protects the weak. That’s definitely reflected in this film. Our family is going on this long journey, but no one helps them at all. That becomes the focal point of the satire. Even though our military dictatorship is over and it’s more democratic than the past, there’s always this sort of thing remaining there, especially for the lower class.”

Park Nam-il (Park Hae-il), Gang-du’s younger brother who is an unemployed college graduate, resorts to tossing Molotov cocktails at the beast during the climax, and we’re clearly supposed to see this as a reversion to his former days as a student protesting against the government – even though he seems too young to have been involved in such activity, which ended at least a decade ago. Bong Joon-ho sees this as a deliberate echo of the past.

“Yes, any protest these days would be done by civil organizations, and they’re quite peaceful,” he admits. “The time of Molotov cocktails and violent demonstrations pretty much ended in the mid-‘90s, so it’s about ten years ago when there was such violent protesting. The second son is sort of like a remnant of that time. In the past he was a protestor; now he is unemployed. When you look in terms of this character, it’s sort of like the feeling of time going backwards. In the beginning, he’s always just complaining. In the middle, after his father dies, he hides in the darkness, then goes and meets up with his old college buddy. By the climax, with Molotov cocktail in hand, it might almost be the image of him in the mid-‘90s. You could say that he is the image of the college protestor back ten years ago; it doesn’t exist in the present day.”

Not only the South Korean government – also the U.S. military presence in the country comes under satirical scrutiny in the film. In the prologue, an American military doctor (Scott Wilson) orders his Korean subordinate to dump toxic chemicals into a drain that leads to the Han River, and the film leaves us in no doubt that this toxic waste is responsible for the mutated creature that emerges six years later. Much of the film deals with government attempts to quarantine people who have come in contact with the creature, because the United States insists that it is the “host” of a contagious virus. Toward the climax, the U.S. intervenes, dosing the city with an anti-bacteriological substance called “Agent Yellow” (obviously named after “Agent Orange”) with little concern for possible side effects on the human population.

Bong Joon-ho sees this plot thread as a standard part of the science-fiction genre (which often relies on nefarious conspiracies to explain the existence of a monsters) as opposed to an overtly anti-American agenda.

“It is true that there is lots of political satire in this film, and that was quite intentional,” he explains. “In regards to the opening scene, there was a famous case seven years ago, where toxins were poured into the Han River. I felt that story also goes in tune with the conventions of the monster genre. For someone who’s preparing a film of a creature coming out of the Han River, to have a case like this in front of me became a very good starting point, and I was very inspired by that event. That was the inspiration for the opening scene and the starting point for the whole story. Of course there would be a line of satire of America; it just became very natural to have it, and it follows in the conventions of the monster genre. But in the broad sense, to compress it or simply it as an anti-American film, I think that’s not correct because there’s always a history of political satire in the sci-fi genre. If you look in the broad sense, the American satire is just one part of it. There is also the satire against the Korean society and, even further, the whole system that doesn’t protect the weak people. That’s the greater flow of satire in this film, not that one part of anti-Americanism.”

Perhaps the first sign that THE HOST is not just another monster movie occurs during the prologue when American actor, Scott Wilson (who played opposite Robert Blake as one of the two stone cold killers in the film version of IN COLD BLOOD) shows up, as an American army doctor. Later, Paul Lazar makes an equally disturbing appearance as another American scientist, who insists that a brain sample needs to be taken from Park Gang-du, the distraught father of the missing girl, in order to “prove” the existence of the virus, which has yet to be isolated. The combined screen time for both actors is only a few minutes, but their presence distinguishes THE HOST from Japanese monster films (like GODZILLA VS. KING GHIDORAH), which typically cast non-professionals when they need to portray American characters.

“It’s also in Korean films where if you had American characters or English-speaking characters, they were cast among American’s living in Korea,” says Bong Joon-ho. “I didn’t like that because it does lower the professionalism of the whole thing. Even though it’s only one scene here and one or two scenes there, I wanted to get professionals to do it right. Paul Lazar was in Jonathan Demme’s SILENCE OF THE LAMBS and also PHILEDELPHIA. In SILENCE OF THE LAMBS he played an insect specialist who made a pass at Jodie Foster; that left a deep impression with me. In terms of Scott Wilson, he’s a famous actor I respect greatly; I have the DVD of IN COLD BLOOD. Knowing his history, I was quite respectful, and that’s way I tried to go for casting him. The whole casting process was actually very by-the-book: I sent them the script along with the DVD of my previous film, MEMORIES OF MURDER; they said yes quite easily. We matched their schedules; they came to Korea, and we shot the whole thing. I was a little concerned about the communication aspect myself, but working with an interpreter it didn’t become a huge problem at all.”

In the great tradition of monster movies, the forces responsible for the beast’s existence remain at the conclusion of the film. When the “Host” itself comes under fire at the climax, you realize that the real villains (the government and military forces) are getting off the hook for their involvement, which leaves the door open for a sequel. Bong Joon-ho expresses no particular interest in doing a follow-up, but the rights for an American remake have already been snagged by Universal Pictures at last year’s American Film Market. 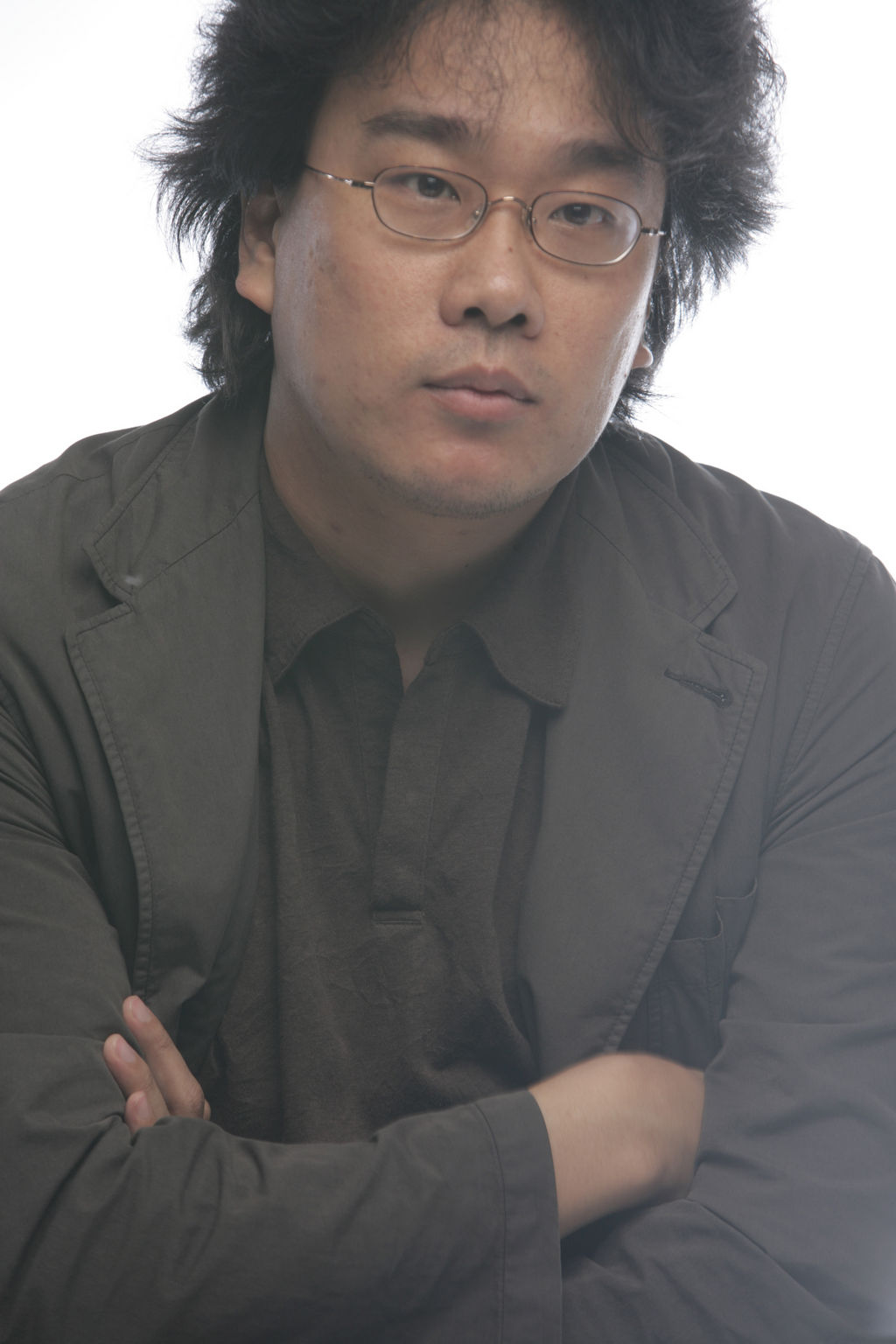 Says Bong Joon-ho, “Whether it be a sci-fi film or a monster film, I would like to do a different type of story [next]. Whatever story I take on next, whatever genre I choose, I’d like to recreate the genre, breathe new life, or find a new form of storytelling with the genre. Except for the musical genre!”

CLICK HERE TO READ HOLLYWOOD GOTHIQUE'S REVIEW OF THE HOST.