EDWARD SCISSORHANDS, the new musical-dance interpretation of Tim Burton's 1990 film, opens at the Ahmanson Theatre in Los Angeles today. The stage adaptation, which had its debut in London before embarking on a tour of U.S. cities,  is devised, directed and choreographed by Matthew Bourne. Caroline Thompson, who wrote the screenplay for the film, co-adapted the material for the stage. Terry Davis composed the score, which incorporates much of Danny Elfman's music for the film. (In Los Angeles, as in many other major cities on the show's tour, the music will be performed live by an orchestra, instead of being played on tape, as in some venues.) Sets and costume design is by Lez Brotherston, lighting by Howard Harrison, and sound by Paul Groothuis. Sam Archer and Richard Winsor alternate in the title role. 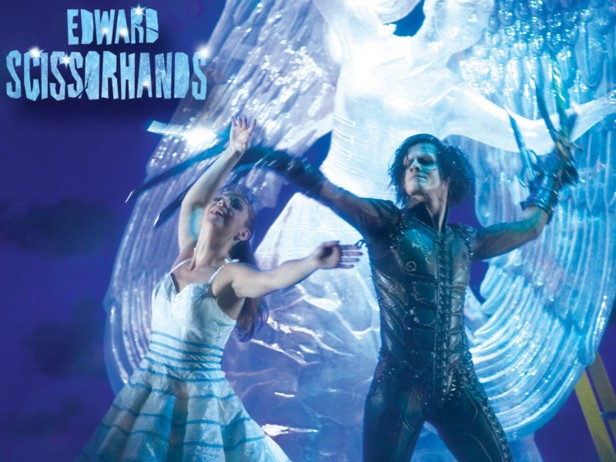 As a promotional even to kick of the stage adaptation, the American Cinematheque hosted a screening of the Tim Burton at the Egyptian Theatre last night, with both Matthew Bourne and Caroline Thompson (along with much of the play's cast) in attendance. Afterward, Bourne and Thompson answered questions about the ten-year process of transitioning the story from screen to stage.

MATHEW BOURNE: When I first saw the film, I didn’t imagine it [the stage adaptation] straightaway. Sometime later, a composer friend of mine said, ‘Give me a few ideas for a good musical.’ I wrote [Edward Scissorhands] down and thought, ‘Why did I write that?’ The music made me think it should be a musical, because it’s great film music and very influential. And then, the story appealed to me, because I love outsider stories – this was the ultimate story of an outsider. It was something I thought would translate wonderfully. It would be a great piece for the designer: the ice sculptures, the topiary, the Gothic elements.

Bourne was adamant that the stage version should stand on its own; he did not simply want to transpose the film onto the stage. (Although he mentioned no names, one might cite Disney's THE LION KING as one example of this.)

MB: There’s too many pieces around that are just translated films in a very direct way. We felt there was something here, where we could capture the essence of it. We were very open-minded about how we turned it into theatre, rather than just translate great cinema onto the stage.

At the same time, Bourne wanted to treat the material respectfully, without being undully reverential. In this regard, he was helped by Caroline Thompson, whom he met through a mutual friend.

MB: Her reaction was, ‘Oh, what a wonderful idea!’ I think it was because she’d seen some of the things I’ve done. She could see how it was possible to turn it into a piece of dance theatre.

The stage version differs from the film in details of both story and design. For example, the play begins with a scene to explain the origin of the title character: a little boy playing with scissors is struck and killed by lightening; his father, an inventor, creates Edward Scissorhands out of grief, as a replacement for his son.

MB: I don’t think I would have taken so many liberties with it, had I not had Caroline by my side. We could discuss it together. You want to honor the piece in some way; you want to approach it in a way that’s not going to upset people. I might have been a little reverential, had Caroline not been involved. You often encouraged me to take things in a different direction. Sometimes we argue things out. I had this image: the first thing you see on stage is a little boy playing with scissors. You kind of ‘wrong foot’ the audience in a way. They think, ‘We’ve come to see this film, and the first thing we see is this boy. Is that Edward Scissorhands? Is that all it’s going to be?’ I thought it would make people go, ‘Oh, this is going to be different.’ I love that image.

Caroline pushed me in a direction for the end of the piece. I didn’t go as far as she wanted me to. She was going to have the whole town ripping him to pieces, and he would become arms, legs and a head

CT: There would be a leg over here and an arm over there, and he would put himself back together.

MT: We could have done that. But we did something else that I’m not going to tell you, because it is a nice surprise. It’s a very poignant ending, and very different from the film.

Another change is that the apparent time period of the story has been pushed to an earlier era, suggesting the 1950s, as opposed to the film, which is a weird combination of ‘60s and ‘70s, dotted with anachronistic technology.

MT: In the UK, that ‘50s look American is much more in the consciousness. It felt more right for us to set it in that – for us – iconic period. It looks different but feels the same.

CT: What we tried to do in the film was what childhood felt like. I defy anybody here today to remember that we did not have answering machines in the 1970s, but we didn’t. Nor did we have VCRs, but it felt like we should have. They served the purpose we needed them to in the film; we just used what we needed. 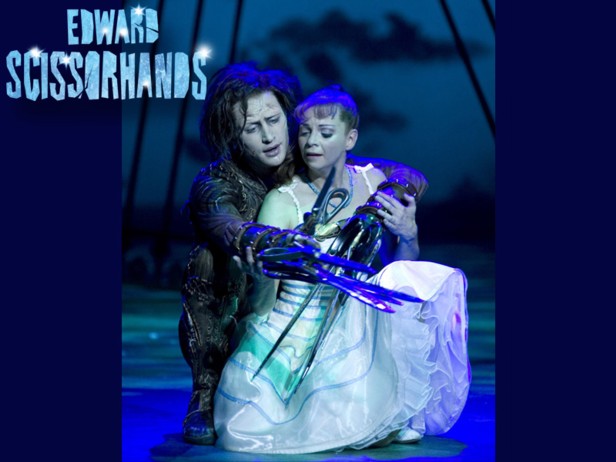 Other differences include the design of Edward's suit - which at first glance resembles the one in the film, until you look closer and realize is lacks the buckles and straps the suggested some kind of weird bondage get-up. Also, the character's namesake scissorhands have been noticably enlarged, presumably to make them more visible on stage.

MT: I don’t know why we made it more difficult for ourselves, because they’re thicker and longer. [puaes as the audience snickers at the unintended sexual innuendo] To me, they presented a nice challenge, in the sense that pulling off any kind of duet can be quite difficult, because it’s been done a million times: a boy, a girl; they’re attracted to each other – go! It’s very difficult to come up with anything different. These hands really helped us come up with different ideas, because you have to create stuff that’s going to make them work. Can he lift with them? Can he support his weight on them? Can the two Kims avoid having their eyes poked out during the duet? These were good things to play with, and made up come up with something different. They’re not the easiest thing to wear throughout the evening. They’re not very heavy, but they do have a certain amount of weight. The arm span, when they put their arms out, is obviously much bigger. So everyone else on stage has to watch out. When we first did it, everyone was really cautious about getting close to Edward; as time went on, they got more daring. They’re also very useful in a dance context; the mixture of beauty and danger is very exciting, I think.

When he first conceived of the project, Bourne had asked Danny Elfman to be involved; however, when the play finally came to fruition, circumstances dictated otherwise.

MT: When the time came to actually make the piece, he was not really available to be 100% involved, the way he would need to be for creating a new piece; he would need to be there on a daily basis. I talked with Danny and involved another composer, Terry Davis, who worked with me on PLAY WITHOUT WORDS and CAR MAN. He agreed to write some new music for us, use Danny’s score – Danny gave us permission for his score to be used, and Terry brought the whole score together, plus some original music.

Johnny Depp has yet to see the production (he was busy filming PIRATES OF THE CARIBBEAN: DEAD MAN'S CHEST when the play made its debut in London), but director Tim Burton did show up.

MB: He was wonderfully generous about the show, and it was a great relief. It would have been really disappointing if he had left during the interim. He came back stage afterwards, and his partner, [actress] Helena Bonham Carter, was in tears. We felt we got the seal of approval.

RELATED ARTICLES: Read a review of the film here.

I heard that a cd by the rock band lovedrug matches up perfectly to the movie edward scissor hands--but check this; you turn your ipod/cd player on shuffle. I think the cd is called everything starts where it ends.
Thursday, April 19th 2007 @ 10:35 AM