Last week I posted this annoucement about "Haunted Hacienda: The Art of Mexican Horror Films."

I went to the opening night reception on Friday, May 5, and it was a blast. Even if you're not particularly into horror from south of the border, the artwork on display is so colorful and garish that you are guaranteed to enjoy a viewing. 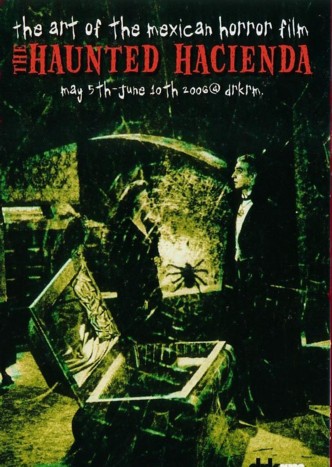 The exhibit's promotional artwork features
a scene from El Vampiro ("The Vampire," 1957)

The exhibition is in the Drkrm gallery, a large suite in the Capitol Studios building in the Glassell Park section of Northeast Los Angeles, not too far from the Glendale Freeway. As the abbreviated name implies, this is not just a gallery but a "darkroom" that provides black-and-white processing and printing services.

The building itself is fairly non-descript, and parking is tricky -- there is no dedicated lot, and only minimal street parking. The neighborhood seems to have a sizable Spanish-language population, which makes this an appropriate venue for the subject matter -- and of course, it made sense to debut it on Cinco de Mayo.

Inside, the dated architecture reminded me vaguely of the "modernistic" sets in the classic 1934 horror film THE BLACK CAT. Music was blasting in the front room (something to do with another exhibition in a different suite), and a helpful series of signs (on notebook paper) led toward the back, where we discovered the exhibition.

The turnout was quite impressive; the room was packed with horror film geeks and with people taking the opportunity to celebrate a piece of Mexican culture on the fifth of May. There were posters on display from THE VAMPIRE (1957), THE BARON OF TERROR (1962), and THE BLOOD OF NOSTRADAMUS (1961). There were 8X10 stills from 1958's THE AZTEC MUMMY and from various films featuring Santo and/or Blue Demon (real-life masked wrestlers who made movies in which they battled werewolves, vampires, and Dr. Frankenstein). And there were some wonderful large prints of photographs from some films, including the grand-daddy of Spanish-language horror, the 1931 DRACULA, which was shot on the same sets as the Bela Lugosi DRACULA, but with a Spanish-speaking cast.

For myself, memories of Mexican horror films are somewhat dimmed by time. They seldom if ever played in theatres, except perhaps in neighborhoods with a large Spanish-speaking population.The films did show up fairly frequently on local television in the 1960s, but they were badly dubbed and often re-edited (sometimes with additional scenes added for U.S. audiences). The films tended to be derivative of Universal classics from the 1930s, but the low-budgets usually kept them from achieving a similar classic status.

Some were quite ridiculous, such as BARON OF TERROR (known in the U.S. as THE BRAINIAC), which can't make up its mind whether it's a horror or sci-fi. A warlock, executed hundreds of years ago, vows to return when a comet re-appears in the sky. Apparently taking its cue from this comet, the film has the warlock return looking like an alien monster with a forked tongue that he uses to suck brians from his victims. It's pathetically obvious that the tongue does not function, so the attack scenes have the actor bobbing his head, trying to get the appendage somewhere near his victims's heads, even though it's clearly incapable of penetrating the skin, let alone the skull.

On the other hand, some Mexican horror efforts were atmospheric and clever. THE VAMPIRE, with its hacienda setting (from which the exhibition takes its name), has a nice feel. And the NOSTRADAMUS films (four in all) had a nice theme, with the vampire pitting his ancient supernatural powers against modern day science, trying to prove that the power of darkness was stronger than the light of reason. In fact, that series is ripe to be remade.

In either case, sublime or ridiculous, seeing artwork from these films brought back fond memories of many fun-filled hours from my mis-spent youth. Hopefully, they can do the same for you, or at least interest you in checking out some of the better titles, which are supposed to available soon on DVD in subtitled, uncut form. (Many are already available on home video, as they were seen on television, dubbed into English.)

David Del Valle, who supplied the artwork, was on hand for the opening night reception, and he graciously took us on a brief tour of his favorite titles. It's an interesting look at what's on display, but the video quality does not do full justice to the colorful art. For that, you will have to visit the gallery in person.

[NOTE: When this video  first became available, so many people were viewing the Haunted Hacienda tour that Hollywood Gothique exceeded its bandwith allotment; consequently, I removed the video from this post (although it was still available on the main website). Now that things have calmed down, as of June 5, 2006, the video is back up. Enjoy!]

The Haunted Hacienda exhibition runs through June 10. Drkrom is open from 11:00am to 5:00pm Tuesday through Saturday. Call (323)233-6867 for more information, or visit there website.